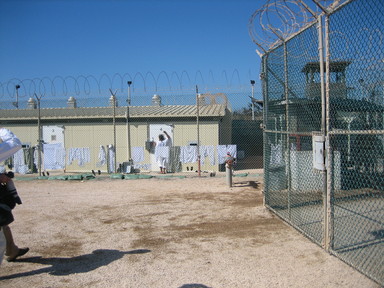 ‘Throughout his incarceration in Afghanistan, Nabil strenuously denied any connection to Al Qaeda, the Taliban or anyone or any organization remotely linked to the 9/11 attacks. And the Americans had no proof of his involvement, save for bogus claims implicating him from other prisoners extracted in a Kabul torture chamber. Several United States interrogators told him his was a case of mistaken identity. Nonetheless, the United States had adopted strict rules for Arabs in custody — all were to be sent to Guantánamo. On Feb. 15, 2002, Nabil was flown to Cuba; shackled, bound and hooded.
Since then, Nabil has been subjected to all the horrors of the Gitmo handbook: sleep deprivation, sensory deprivation, temperature extremes, prolonged isolation, lack of access to sunlight, almost no recreation and limited medical care. In 11 years, he has never been permitted a visit from a family member. For reasons known only to the men who run the prison, Nabil has never been waterboarded. His lawyer believes this is because he knows nothing and has nothing to give.’

‘Nabil has not been the only “mistake” in our war on terror. Hundreds of other Arabs have been sent to Gitmo, chewed up by the system there, never charged and eventually transferred back to their home countries. (These transfers are carried out as secretly and as quietly as possible.) There have been no apologies, no official statements of regret, no compensation, nothing of the sort. The United States was dead wrong, but no one can admit it.’

I wholeheartedly support Mr. Grisham’s plea. If we are serious about winning hearts and minds – obviously we are not – and if we have a sense of justice we should compensate those prisoners who were incarcerated mistakenly. We spent billions of dollars on futile projects in Afghanistan and Iraq; we should spend a few million dollars on those prisoners that were “collateral damage” in the war on terror.