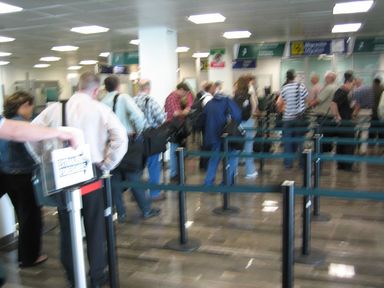 David Brooks today in the New York Times on immigration:

“The United States is the Harvard of the world. Millions long to get in. Yet has this country set up an admissions system that encourages hard work, responsibility and competition? No. Under our current immigration system, most people get into the U.S. through criminality, nepotism or luck. The current system does almost nothing to encourage good behavior or maximize the nation’s supply of human capital.
Which is why the immigration deal reached in the Senate last week is, on balance, a good thing. It creates a new set of incentives for immigrants and potential immigrants. It encourages good behavior, in the manner of a demanding (though overly harsh) admissions officer. It rewards the bourgeois virtues that have always been at the heart of this nation’s immigrant success, and goes some way to assure that the people who possess these virtues can become U.S. citizens.
Let’s look at how this bill would improve incentives almost every step of the way.
First, consider the 10 to 12 million illegal immigrants who are already here. They now have an incentive to think only in the short term. They have little reason to invest for the future because their presence here could be taken away.”

I met a few illegal immigrants who invested heavily in their future, and eventually became citizens.
I met quite a few citizens who were far away from the so-called bourgeois virtues.

Also incentives can backfire and it's impossible to force bourgeois virtues upon all your citizens and would-be citizens, I'm afraid.