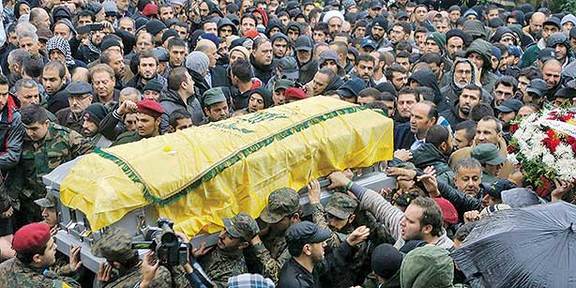 An article by Martin Chulov in The Guardian about Hezbollah and Syria, very much worth reading:

‘In a grand manor house in northern Lebanon, eight men, all of them well-to-do professionals, had gathered to hear an important visitor talk about the war.
Their guest was late; the going had been heavy across the mountain from Beirut, north up the Bekaa valley and finally west along the flat, spotless, Iranian-made highway that leads to Hermel. Arriving from the bitter chill of a winter evening, he eased into a warm living room where the expectant men edged forward, addressing the new arrival by a nom de guerre widely known throughout Hezbollah, the powerful militant group he had joined more than 20 years ago.
"This is a war not just against us, but against humanity," he said. "And it is one that we will win."
He was referring to the war to the east in Syria, a conflict in which Hezbollah has admitted playing a significant role, rallying to the cause of the Syrian army in its protracted battle against the opposition forces and Sunni Islamist groupings ranged against it.
Speaking carefully and deliberately, the commander, whom the Guardian agreed not to name, initially stuck to the official script that characterises Hezbollah as reluctant saviours of a beleaguered nation hemmed in by extremist Sunni militants on one side and by Israel on the other. In nearly three years of insurrection and war in Syria, it has been difficult to hear anything else from a Hezbollah official.
But over two increasingly unguarded hours, the commander strayed on to themes rarely covered: the regional impact of the group's role in Syria, the intensity of the fighting and the performance of the Syrian Army, which not long ago had been fighting a losing battle to retain control of the country. Those foregathered listened intently. All broadly supported the fight against the Syrian opposition, even if they differed on the virtues of Syria's leader, Bashar al-Assad.’

‘Solar-powered lamps provided by Iran light the pristine road back to the Bekaa Valley, where potholes and darkness replace the stretch of bitumen. Here, only 15km from one of Hezbollah's main strongholds, the world view also changes suddenly.
At the first Lebanese army checkpoint heading south, several soldiers stopped our car and asked if we had a place for one of them. "I'm deserting," a 19-year-old Sunni Muslim conscript said. "I've had enough of this. Another rocket [from Syria] just landed. I want to go there and fight."
Echoing the words of the Hezbollah leader, he said: "This is a war that we cannot lose. We will win, whatever the cost."’

Apparently Hezbollah (i.e. Iran) is not willing to give up on Assad and Syria, quite the opposite.

Which role Syria played in the US-Iran thaw is not clear yet, but it is plausible that Obama and his team concluded that Assad is preferable to the opposition. Which would make the US and Iran allies, at least in Syria.

The other question is, how important is the Sunni-Shia conflict going to be in the Middle East? The conflict appears to be growing rapidly. After all, both sides talk about a war they cannot lose.