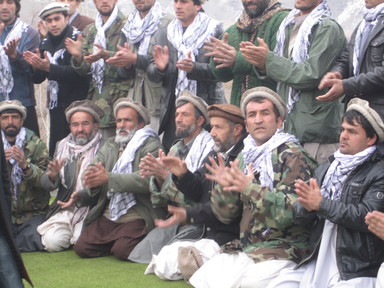 Anatol Lieven on Afghanistan in The New York Review of Books:

“In Kabul, the changes wrought by the West’s twelve-year Afghan adventure have a certain solidity, at least to the point where the banks and office buildings would make for reasonably imposing and long-lasting ruins. Even some more intelligent members of the Taliban seem to recognize that the Afghan capital, a city of some five million people, is no longer the rubble-filled and shrunken city that they ruled in 2001; that the modern educated classes have grown to the point where they cannot be subjected to the moral code of a madrassa in a Pashtun mountain village.”

The Afghan man with whom I’m presently travelling in his fatherland pointed out that the Afghan constitution, established with the help and support of the West, resembles very much the moral of madrassa.
I’ve not been in Kabul in 2001, but Kabulis I met insisted that 2005 was much better than 2013. And although Kabul feels (at least for a Westerner like me) better than Baghdad in 2009 it does resemble a city under siege.

Lieven again: “Yet the West must still pursue peace with the Taliban. For the alternative to a settlement is a civil war with no foreseeable end, fueled not only by Afghan hatreds but by aid from Pakistan, India, Russia, and Iran to their local proxies.”

Yesterday I visited the Panjshir Valley, approximately 100 miles north of Kabul. I went to the house of a warlord, a Tajik, (the valley is inhabited by Tajiks), a former commander of the famous military leader Massoud who is still worshipped in this valley (and not only there) as a hero.
Massoud first fought against the Russians, rather successfully, and then against the Taliban. He was killed on September 9, 2001.
By talking to this people I realized that the difference between the Northern Alliance and Taliban was minor.
Massoud fought against the Taliban because he believed that the Taliban was Pakistan in disguise and needed to be kicked out of Afghanistan, and not because the moral and religious beliefs of the Taliban were wrong in his eyes and those of his followers.