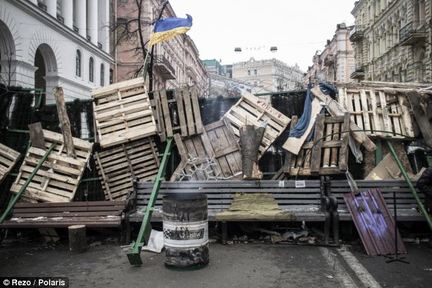 “Enter a lonely, courageous Ukrainian rebel, a leading investigative journalist. A dark-skinned journalist who gets racially profiled by the regime. And a Muslim. And an Afghan. This is Mustafa Nayem, the man who started the revolution. Using social media, he called students and other young people to rally on the main square of Kiev in support of a European choice for Ukraine. That square is called the Maidan, which by the way is an Arab word. During the first few days of the protests the students called it the Euromaidan. Russian propaganda called it, predictably enough, the Gayeuromaidan.
When riot police were sent to beat the students, who came to defend them? More “Afghans,” but “Afghans” of a very different sort: Ukrainian veterans of the Soviet Red Army, men who had been sent to invade Afghanistan during after the Soviet invasion of that country in 1979. These men came to defend “their children,” as they called the students. But they were also defending a protest initiated by a man born in Kabul at the very time they were fighting their way toward it.
In December the crowds grew larger. By the end of the year, millions of people had taken part in protests, all over the country. Journalists were beaten. Individual activists were abducted. Some of them were tortured. Dozens disappeared and have not yet been found. As the New Year began the protests broadened. Muslims from southern Ukraine marched in large numbers. Representatives of the large Kiev Jewish community were prominently represented. Some of the most important organizers were Jews. The telephone hotline that people called to seek missing relatives was established by gay activists (people who have experience with hotlines). Some of the hospital guards who tried to stop the police from abducting the wounded were young feminists.

In all of these ways, the “decadent” West, as Russia’s foreign minister put it, was present. Yes, there were some Jews, and there were some gays, in this revolution. And this was exploited by both the Russian and Ukrainian regimes in their internal propaganda. The Russian press presented the protest as part of a larger gay conspiracy. The Ukrainian regime instructed its riot police that the opposition was led by a larger Jewish conspiracy. Meanwhile, both regimes informed the outside world that the protestors were Nazis. Almost nobody in the West seemed to notice this contradiction.”

Timothy Snyder’s informative article on Ukraine is a must-read. (Read it here.)

Interesting detail, the revolution in Kiev was initiated by an Afghan, later came Afghan-veterans (Ukrainian soldiers who fought with the Russian army in Afghanistan), Jews, gays, other minorities and Ukrainians.

I’m afraid that the West will abandon the revolutionaries in Ukraine, after all the West has a tradition of siding with dictators and not with the people, all in the name of stability.