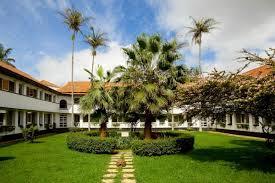 Shortly before landing in Kigali, Rwanda, the captain of flight KL 539 announced that the plane had collided with a bird, there was a rather severe crack in the window of the cockpit – according to the captain our safety was not compromised – but the plane could after landing obviously not continue its travel, and the captain had to consult with headquarters whether we were going to land in Kigali or in Entebbe.
After 15 minutes or so the captain announced that we were going to Entebbe. We flew to Entebbe, rather slowly and at low altitude, and after landing the passengers for Kigali were asked to stay on board.
After another 20 minutes ground staff informed the passengers that we were going to a hotel and that tomorrow we would be informed whether we would continue our trip with Rwandair or with Uganda Airlines. But he could give us no further information.
We were told that immigration officers would waive visa obligations. Indeed, the immigration officer just charged me 50 dollars, gave me a receipt, took my fingerprints and let me in.
Then more chaos ensued.
After having collected the luggage I followed the other passengers for Kigali, but apparently not all passengers were going to the same hotel. I had boarded the bus for Lake Victoria Hotel where they could not find my reservation.
I pleaded with the front desk manager: “Let me in, I don’t feel well, I pay for my room, but let me in.”
KLM had served me raw chicken on the flight from Amsterdam to Kigali, I was so hungry that I ate it. The crew was helpful and friendly, but the chicken was raw. Now I had a severe headache, my stomach was being tortured, I felt like throwing up.
And they let me in, the angels were taking care of me, they just forgot to check the chicken.
Goal of this trip is Congo to see the work of the organization Doctors without Borders in parts of the D.R.C. But for the time being I’m stuck in Entebbe.