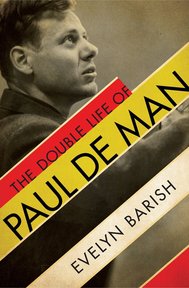 This review by Peter Brooks on Evelyn Barish’ biography “The Double Life of Paul de Man” is very much worth reading, if only for this sentence: “It would seem a general principle of the biographical art that one should avoid assigning positions in Hell to one’s subjects.”

But there is more:

“The more interesting story to me is that of de Man’s rapid success in the world of New York intellectuals. It reads like Balzac’s Lost Illusions,the story of a young writer’s hyperbolic rise, but without the inevitable crash that follows in the novel.
De Man took a job in the stockroom at the Doubleday bookstore. It was apparently through his friendship with Georges Bataille that he made contact with Dwight Macdonald: Macdonald owed Bataille $20 for using his review of John Hersey’s Hiroshima in the journal Politics, and de Man served as the intermediary for the payment. He was an emissary of European literature at a time when New York was interested: Macdonald put him on the Europe America Group he was forming. At one of Macdonald’s parties on East 10th Street, he met Mary McCarthy, who became a good friend, for a time, and possibly more—Barish toys with their possible affair for many pages. She recommended him for his first teaching post, at Bard, replacing the professor of French who was taking a sabbatical. His relations with McCarthy soured; she evidently was disappointed by him, although Barish’s account does not make clear just why.”

“De Man’s work resists simplification, and also systematization—as he said himself, he was not a philosopher, but a philologist—and it evolved over time. One can say, in the most general terms, that it is united by a suspicion of ideology as a mystification that takes the seductions of rhetoric as something in which to believe. He wrote: ‘What we call ideology is precisely the confusion of linguistic with natural reality, of reference with phenomenalism.’”

Paul de Man’s work, which I haven’t read, may be more interesting than this biography. Actually this review makes me want to read Paul de Man. That ideology is first and foremost a mystification is something we can see daily.

(A while ago Jennifer Schuessler wrote about Barish in the Times, read it here.)