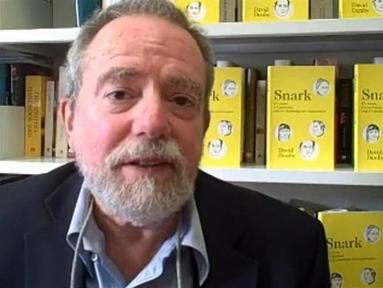 Finally, Lars van Trier “Nymphomaniac” is out in the U.S. Read J. Hoberman on this movie:

‘Von Trier declines to judge his protagonist. Unlike Steve McQueen, whose hellish portrait of a male sex addict was called Shame, or the didactic moralist Michael Haneke (who, in his adaptation of The Piano Teacher, completely missed the comic elements in Elfriede Jelinek’s novel of nymphomaniacal compulsion), von Trier has a sense of humor. However lumpy and tasteless it may be, his gruel is not without its raisins. There is a very funny montage in which young Joe tells a succession of lovers that they have given her her first orgasm; a tumultuous sequence in which an abandoned wife (Uma Thurman), accompanied by her young children, confronts the home-wrecking young Joe, volubly and at great length; a charming religious vision that, among other things, satirizes von Trier’s erstwhile model, Andrei Tarkovsky; and a scurrilously farcical scene in which mature Joe is sandwiched between two squabbling slices of male bread.
Much of the time, however, Nymphomaniac is dogged in its pursuit of what the academic film theorists of the 1970s used to call “unpleasure.” Or at least, that is how it seemed to me. Writing in The New Yorker, David Denby, not hitherto an admirer of von Trier, praised the movie as a “pornographic work of art” which means, I suppose, that it was some sort of turn-on.’

A few remarks. I’m not sure if Jelinek’s novel is about nymphomania, perhaps I should read it again. Yes, Von Trier is better at comedy than Haneke, but we should definitely not overestimate the comedian Elfriede Jelinek. By the way, the stab at Denby was rather funny.

‘Although variously a parody of Freudian analysis or a gloss on the Arabian Nights, Nymphomaniac most closely resembles an eighteenth-century novel about a young woman’s sexually-driven rise and fall or fall and rise; indeed, the first scientific study of female hypersexuality, Nymphomania, or a Dissertation Concerning the Furor Uterinus, was published by a French doctor in the late eighteenth century. Joe, however, is neither De Sade’s oft-violated Justine (for whom the protagonist of Melancholia is named) nor her sister, the sexual terrorist Juliette (although she shares some of her traits). Neither is she Pamela, Clarissa, or Moll Flanders.
In the end, she is the artist. Von Trier is proud of his provocations yet concerned that the audience may too easily indulge him or, pace David Denby, actually become aroused. Indeed, that, in a sense, is the movie’s punchline. Anxious that he will no longer be able to top himself, von Trier is willing to end Nymphomaniac—if not his career—with a cheap stunt meant to rebuke his admirers, as if to prove that he still can.’

All in all J. Hoberman’s review of this movie is fair. I was slightly more impressed than he was, he failed to notice that “Nymphomaniac” is much better than “Antichrist” and I’m not sure to what cheap stunt he is referring.
To label the ending of a movie a cheap stunt without explaining yourself is, well, worse than a cheap stunt.

But we will forgive J. Hoberman. Perhaps he was shocked how pleasurable unpleasure can be. Or he thought of David Denby instead of looking at the screen.