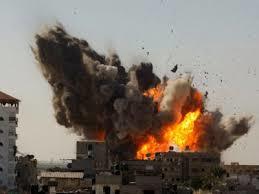 This essay by Nathan Thrall is worth reading:

“As Hamas fires rockets at Israeli cities and Israel follows up its extensive airstrikes with a ground operation in the Gaza Strip, the most immediate cause of this latest war has been ignored: Israel and much of the international community placed a prohibitive set of obstacles in the way of the Palestinian “national consensus” government that was formed in early June.
That government was created largely because of Hamas’s desperation and isolation. The group’s alliance with Syria and Iran was in shambles. Its affiliation with the Muslim Brotherhood in Egypt became a liability after a July 2013 coup replaced an ally, President Mohamed Morsi, with a bitter adversary, Gen. Abdel Fattah el-Sisi. Hamas’s coffers dried up as General Sisi closed the tunnels that had brought to Gaza the goods and tax revenues on which it depended.”