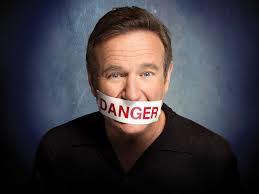 “That was a role within a role, of course, and Mr. Williams’s best serious movie characters — or maybe we should say the non-silly ones, since an element of playfulness was always there — had a similar doubleness. Watching him acting in earnest, you could not help but be aware of the exuberance, the mischief, that was being held in check, and you couldn’t help but wonder when, how or if it would burst out. That you knew what he was capable of made his feats of self-control all the more exciting. You sometimes felt that he was aware of this, and that he enjoyed the sheer improbability of appearing as the straight man, the heavy, the voice of reason.”

To enjoy the sheer improbability of appearing as the straight man, a beautiful definition of what irony is, or of what it should be.