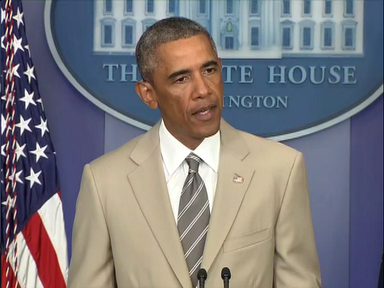 Frank Bruni on Obama and rhetoric:

“Speaking at a fund-raiser on Friday, he told donors, “If you watch the nightly news, it feels like the world is falling apart.” He had that much right.
But it wasn’t the whole of his message. In a statement of the obvious, he also said, “The world has always been messy.” And he coupled that with a needless comparison, advising Americans to bear in mind that the rise of the Islamic State in Iraq and Syria, the rapacity of Putin, the bedlam in Libya and the rest of it were “not something that is comparable to the challenges we faced during the Cold War.” Set aside the question of how germane the example of the Cold War is. When the gut-twisting image stuck in your head is of a masked madman holding a crude knife to the neck of an American on his knees in the desert, when you’re reading about crucifixions in the 21st century, when you’re hearing about women sold by jihadists as sex slaves, and when British leaders have just raised the threat level in their country to “severe,” the last thing that you want to be told is that it’s par for the historical course, all a matter of perspective and not so cosmically dire.”

Frank Bruni appears to be missing historical consciousness, yes ISIS is atrocious but cruelty has always been here. That’s not an excuse, just a reminder that hysteria is not a solid base for making decisions.
So, Obama is right with his relativism, his hesitance to deploy the US army in countries like Iraq or Syria.
In 2008 a US soldier in Iraq told me with apparent disgust: “We are babysitting a civil war here.” That babysitting was not overly successful, but nowadays many people want the US to start babysitting again.
I’m far from being an isolationist but just take a look at Libya to realize that military involvement of the US or NATO doesn’t guarantee a desirable outcome, quite the opposite.