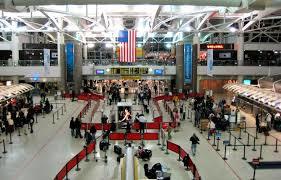 On Sunday night I was supposed to fly from New York to Paris but the Air France pilots are on strike, so my flight got cancelled.
I flew via Frankfurt to Amsterdam and tomorrow I will take the Thalys to Paris.
Allow me to say a few words about the food situation in terminal 1 (the Lufthansa and Air France terminal) at JFK. After security the food situation there is horrendous. At the airport in Kigali, Rwanda, you will get better food. Last night at terminal 1, all they could offer me was mozzarella that tasted like plastic that was dipped in vinegar, and some potato chips.
Compared to terminal 4 where the food situation is acceptable I wonder why terminal 1 is not willing to offer a decent meal to hungry travellers? Is this what is called market failure? Or is it sheer sadism? Based on the premise that air travel is an endeavor for masochists and the masochists should be pampered the moment they step out of the cab.
Speaking of which, this morning a security guard at Frankfurt Airport said to me: “Open your belt.”
I opened my belt.
Then he said: “Let me feel.”
Airport security is getting more and more erotic. At busy airports there should be lanes for business travels, for families wilt children and for travellers looking for a quick hookup with the security guard.
You can fight terrorism and support casual sexual encounters at the same time.
When was the last time somebody said to you: “Open your belt.” (Please note, not: “Take your belt off.” No: “Open your belt.” Sex is in the details.)