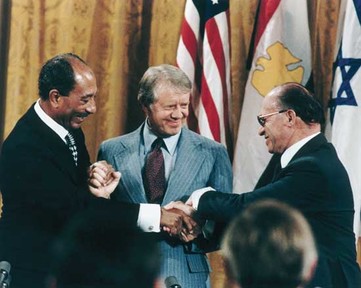 ‘In words still applicable, Wright observes: “It was a paradox: nothing could be a greater gift to Israel than peace, and nothing was more politically dangerous for an American politician than trying to achieve it.” Carter was not swayed. He had a sense of destiny, a quixotic belief that God would also be present at the talks.’

Nevertheless, the article (and probably also the book, which I haven’t read yet) leaves the possibility open that the peace accord signed on March 26, 1979 was a mixed blessing. Main issues were left unresolved, Carter felt betrayed by Israel: ‘As soon as the Knesset approved the accords, Begin announced plans to “thicken” West Bank settlements. Carter was livid. When Sadat and Begin were awarded the Nobel Peace Prize, Carter noted in his diary: “Sadat deserved it.”’

Certain is that the main characters of the peace accord were not headed for a bright future.

Begin started a rather disastrous Lebanon war on June 6, 1982. Not long after the Sabra and Shatila massacres (and the death of his wife) he retired from public life.