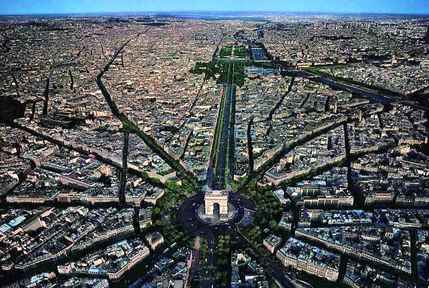 I’m a tad behind with magazines, so while my godson was taking part in a snowboard competition I was reading Anka Muhlstein’s article on Patrick Modiano in the December 18 issue of NYRB:

‘This first book, La Place de l’étoile, marked the beginning of a long series. From then on, he would be a writer and nothing else. He was twenty-three years old. As an epigraph to his novel (whose title in French might equally refer to the Parisian square at the center of which stands the Arc de Triomphe or the location of the yellow star of David that Jews were required to wear prominently during the Occupation) Modiano chose a Jewish joke to make sure no one misunderstood: “A German officer approached a young man and asked: ‘Excuse me, sir, where is the Plce de l’Étoile?’ The young man pointed to the left side of his chest.” La place de l’étoile made quite a splash and won two prizes designed to encourage young authors, but it as not translated into English. It is a surprising book: not just provocative, but also disorienting. It sometimes feels as if it were spinning out of control. The story is so fast-moving, absurd, and hallucinatory, mixing real and fictional characters with such flair, that it is hard to follow, and yet it carries the reader along until, in the end, he finds the main character stretched out on the couch of a psychoanalyst whom he takes for Freud. The story told in a partly autobiographical style is that of Raphael Schlemilovitch, a French Jew born just after the war, haunted by images of the war and by a persecution mania. A thousand contradictory identities coexist inside him, alternately, an anti-Semitic Jew, ultra-collaborationist, and also a vengeful wandering Jew, each of them pushed to the outer limit, unable to settle for being “just a Jew”.’

'This fog that envelops people and places explains a lack of depth and individuality in Modiano’s characters. The author, and therefor the reader, are left on the outside, giving rise to the feeling that one is always rereading the same book. This is doubtless the reason why Modiano, in spite of his remarkable talent, and a success that has never flagged in the past forty years, has not acquired the indisputable stature of very great novelists.'

A Catalan publisher at the book fair said it shorter: “Modiano is a great, small novelist.”

Indeed, Patrick Modiano is not a great psychologist, his understanding of human behavior is limited, but he is very good at describing the fog, and it’s exactly this fog where most people live in. The human fog is less visible in “La place de l’étoile”, which is a rather strange novel in his oeuvre. Being outrageous is not Modiano’s strongest point; he is everything but a Houellebecq, who deserves the Nobel Prize as well. Perhaps more so than many of the so-called indisputable very great novelists.