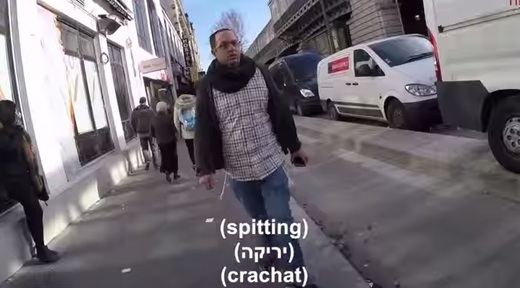 An excellent article by Anshel Pfeffer in Ha’aretz:

‘Last week, a news organization contacted me about making their own version of “10 Hours of Walking in Paris as a Jew,” the YouTube sensation which has so far (as of Thursday morning) been viewed more than four and a half million times.
If you haven’t seen it, the clip shows Makor Rishon journalist Zvika Klein walking with his kippa and tzizit [the fringes of his prayer shawl] through various neighborhoods in Paris. In the condensed 97 seconds of the clip, Klein gets spat at, cursed and threatened by men of North African appearance, for daring to walk there openly as a Jew.
The producer who called me wanted to go one better and film similar walks in five different cities around Europe, starting with Brussels. I was intrigued by the concept but after a few minutes of reflection I declined. Something felt wrong about the idea.’

‘The Jews of Europe aren’t some cowering defenseless group, and their main problem certainly isn’t that they are afraid of wearing a kippa in dodgy Muslim neighborhoods.
Actually, Jews are the best-integrated and most successful minority on the continent. They are currently receiving the highest level of security from their local governments and police forces, who are only improving and intensifying security measures in the wake of attacks in France, Belgium and Denmark.
Reducing contemporary anti-Semitism to nasty reactions to a man wearing a kippa is minimizing, trivializing and simplifying the challenge facing all Europeans right now.
The world’s attention has been drawn to these issues by the attacks carried out on Jewish (and other) targets in the last three years by radicalized, European-born Muslims. Yet while the murder of 13 Jews in the course of these attacks is tragic, it is not a threat to the continuation of Jewish life in Europe.’

‘A small number of homegrown jihadists is not the problem, just as a few Muslims standing in solidarity outside a synagogue is little more than an empty gesture.
I am not about to excuse anyone who curses or spits on a Jew, and the security establishment and intelligence community in Europe has to rapidly up its game and ferociously root out the jihadists. It’s not a Jewish issue, but a threat to all Europeans, particularly to Muslims.
But the real threat is the too-slow acknowledgment of the collapse of identity in Europe. While politicians and the media are focused on the inevitable collapse of the joint currency, the failing euro is only one aspect of what’s ailing the continent.
The old national identities discredited in the last century by fascism and communism left a vacuum that the dream of pan-European multiculturalism failed to fill.
Now, as decades of prosperity have come to an end, entire societies with failing birthrates have little to offer a restless younger generation that lacks a sense of belonging and hope of a future.
No wonder all the old phobias and some new ones are making a comeback, making minorities ever more vulnerable. The implosion of Greece and the emergence of irresponsible radical leftists and hate-filled neofascists could be just a microcosm of what lies in store for the entire continent.
Charlatans on all sides are exploiting this identity crisis. European Muslims are facing xenophobia and poverty, while external players, not only ISIS, are trying to use them for their own noxious interests.
It’s certainly no coincidence that Europe’s most prominent anti-Semite, French comedian Dieudonne, turned up in Tehran this week. Jews are trying to tackle assimilation, intermarriage and tensions between the ultra-Orthodox and other streams, while trying to maintain the numbers to have a viable communal life. The physical threat is just the latest addition to their ongoing challenges.
Rising anti-Semitism is largely a symptom of this European breakdown. It is a result of tensions in the Muslim community, the resurgence of the nationalist far-right and the toxic way the Israel-Palestine conflict is prominently portrayed in European media, ramped up by far-left BDS activists.’

One could argue with Pfeffer what exactly is far-left and what not, but that would be missing the point.

Many of us share responsibility for this collapse; the myth that being anti-establishment in Europe means being anti-Europe is still alive and kicking.