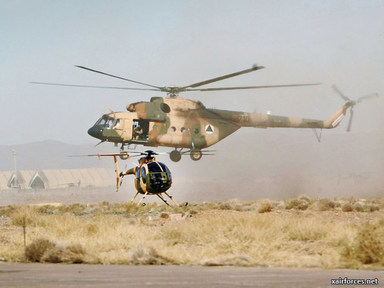 This article by Rod Nordland about the buildup or rather the not-buildup of the Afghan airforce is a mixture of Groucho Marx and painful truth-seeking.

‘Col. Qalandar Shah Qalandari, Afghanistan’s most decorated pilot, recently took command of what was meant to be the building blocks of his country’s new air force: a squadron of shiny American-made attack helicopters, intended to solve the chronic lack of close air support for Afghan troops.
Sixteen of the armed MD-530 scout helicopters were rushed here this year to great fanfare, and a dozen more are to join them. But Colonel Qalandari was not impressed. “This plane is a total mess,” he said. “To be honest, I don’t know why we have this plane here.” An Afghan public affairs officer tried to shush the colonel as he spoke to a journalist at the Afghan Air Force base at Kabul airport. A United States Air Force public affairs officer looked on aghast.
But Colonel Qalandari kept on: “I will tell the truth. This is my country, and these are my men, and they deserve the truth.”’

‘“This is a sustainable solution,” said Lt. Col. James Abbott, an Air Force trainer who put off retirement to help run the MD-530 program in Afghanistan. “You’re fighting guys with a gun in the back of a pickup truck: How much technology does that need?”’

‘Already, one of the new helicopters has crashed, while an American pilot was flying with an Afghan trainee near the 8,000-foot-high Lataband Pass, just east of Kabul.
Colonel Qalandari said the incident showed the limitations of the helicopter in Afghan terrain. After the helicopter landed, a recurring tail rotor problem, plus its light weight, caused it to tip over in a wind. While the crew escaped safely, the aircraft rolled down the mountainside, toppled off a cliff, and was completely destroyed.

“When my pilots fly in this, only God and I know what they’re going through,” the colonel said. “And I don’t know whether they’ll make it back.”’

‘That has been difficult for Afghans to accept. As another American general put it, speaking on the condition of anonymity while criticizing an ally, the heavy American use of air power in previous years has made Afghan government forces feel excessively dependent on it.
“The Taliban doesn’t complain about not getting air support,” the general said, “but they get it done.”’

This article should be mandatory reading material in every place where counter insurgency is being studied.

And remember, if you complain about not getting air support you are a pussy.

But it’s true, the Taliban doesn’t get much air support, the same can be said about IS.