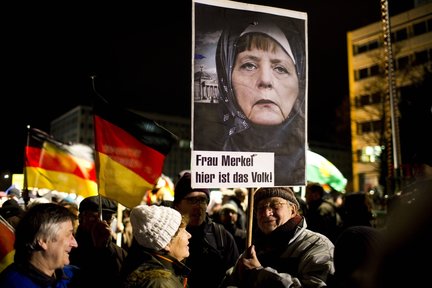 Der Spiegel on new and old right in Germany:

'Martin Bahrmann, a local politician in the Saxon town of Meissen, was just preparing to speak in a council debate on refugee shelters when a ball-point pen ricoched off the back of his head. It was a cheap, plastic writing utensil -- blue with white writing.

As a member of the business friendly Free Democrats (FDP), Bahrmann's seat in the regional council is at the very back and the visitors' gallery is just behind him. The pen must have come from somebody in the audience. When Bahrmann turned around, he found himself looking at a sea of hostile faces. Although there were around 80 visitors in the gallery, nobody admitted to having seen who threw the pen. On the contrary: The FDP representative and his colleagues were later insulted as being "traitors to the German people."

Bahrmann, 28, does not draw a salary for his involvement in local politics. It is merely his contribution to a functioning democracy. He was born and grew up in the region he represents and he has known many of the people there for many years. But even he, Bahrmann says, now must be more careful about when and where he makes political appearances. Ever since the regional council discussed transforming the former Hotel Weinböhla into a refugee hostel, the established political parties have been confronted with the hate of many locals. One Left Party representative was spit on as he was walking down the street while another was threatened with violence. Meanwhile, representatives from the right-wing populist Alternative for Germany (AfD) party and the neo-Nazi NPD were celebrated for having voted against the refugees in the regional council.

The pen thrown in Meissen may not have garnered much media attention, but it says a lot about the public mood in Germany, a country in which increasing numbers of people are united against the state, its institutions and its elected officials. It is a country in which antipathy towards democracy is gradually increasing while xenophobia is growing rapidly. And it is a country where incidents of right-wing violence are on the rise and refugee hostels are set on fire almost daily.'

'Meanwhile, reputable pollsters such as Allensbach and Infratest dimap put the AfD's support among voters at around 8 to 10 percent. The AfD, for its part, prefers to rely on the studies of its own in-house pollster, Hermann Binkert, a former spokesman for Thuringia's Christian Democratic governor, Dieter Althaus. Binkert believes his party would get 22 percent of the vote if elections were held this Sunday.

"Of course we have first and foremost the refugee crisis to thank for our resurgence," says deputy party chief Alexander Gauland, a long-time CDU politician and publisher of the regional newspaper Märkische Allgemeine Zeitung. Like the other protagonists of the New Right, he puts emphasis on appearing civilized -- at least outwardly. "You could call this crisis a gift for us. It has been very helpful." That hasn't stopped Gauland from calling the people, whose arrival has been such a gift for him, "barbarians."'