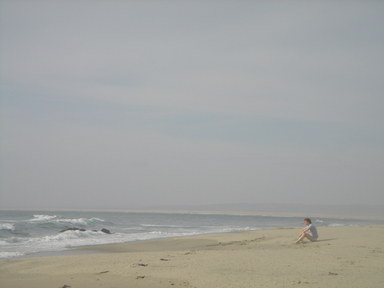 Namibia, December 2005 or January 2006, I'm not sure.
Tonight I overheard a conversation about Namibia and I was reminded of my three trips to Namibia, February 2005, July 2005, and December/January 2005/2006.
Tonight I said, while waiting for a cab: "Apologies, but I overheard your conversation, it's absolutely worth going to Namibia."
In the summer of 2005 I almost killed my godson (at that time one year old) by travelling through the desert without enough water.
In the winter 2006 my girlfriend at that time fell ill in the town of Lüderitz. She stayed in the hotel while I was roaming the deserted streets of Lüderitz.
I remember the fear that we would never be able to leave Lüderitz, but it was not even that frightening. I felt that I was capable of making a living in Lüderitz.