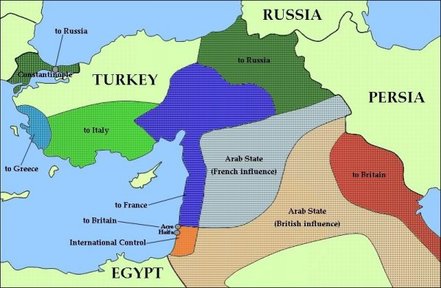 'There probably aren’t many things that the Islamic State, Jon Stewart and the president of Iraqi Kurdistan agree on, but there is one: the pernicious influence of the Sykes-Picot Agreement, a secret plan for dividing up the Middle East signed by France and Britain, 100 years ago this week. It has become conventional wisdom to argue, as Vice President Joseph R. Biden Jr. recently did, that the Middle East’s problems stem from “artificial lines, creating artificial states made up of totally distinct ethnic, religious, cultural groups.”

That Western imperialism had a malignant influence on the course of Middle Eastern history is without a doubt. But is Sykes-Picot the right target for this ire?'

"In 1919, President Woodrow Wilson sent a delegation to devise a better way to divide the region. Henry King, a theologian, and Charles Crane, an industrialist, conducted hundreds of interviews in order to prepare a map in accordance with the ideal of national self-determination.

Was this a missed opportunity to draw the region’s “real” borders? Doubtful. After careful study, King and Crane realized how difficult the task was: They split the difference between making Lebanon independent or making it part of Syria with a proposal for “limited autonomy.” They thought the Kurds might be best off incorporated into Iraq or even Turkey. And they were certain that Sunnis and Shiites belonged together in a unified Iraq. In the end, the French and British ignored the recommendations. If only they had listened, things might have turned out more or less the same."

In other words, there are no just borders in the Middle East. The more borders the more conflicts. But to push different ethnic groups into one state appears to be an open invitation for conflict as well.

The nation-state may be an outdated medicine, like phlebotomy.