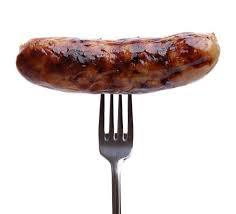 'Georgia, a proud nation in the Caucasus that went to war with Russia in 2008, is no stranger to conflict. But a weekend assault by sausage-wielding attackers at a vegan cafe in central Tbilisi is fanning concerns that a simmering culture war could be intensifying.

The attack began Sunday evening at the bohemian Kiwi Café — a popular spot for foreigners and Georgians alike — when, witnesses say, more than a dozen men carrying slabs of meat on skewers suddenly showed up and began pelting patrons with grilled meat, sausages and fish.

Witnesses writing on social media said that customers at the cafe, who were watching an animated science fiction sitcom called “Rick and Morty,” felt intimidated by the men, who refused to leave. The cafe referred to the attackers, some of whom wore sausages around their necks, as anti-vegan “extremists.”'

It has come to this: anti-vegan extremists.

One could argue: better an anti-vegan extremist than an antisemite, a homophobe or an Islamophobe.

Nevertheless I have to declare: I'm a strict vegan.