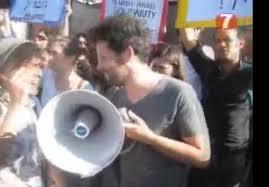 Today, I witnessed the so-called Jerusalem Day Flag March. One of the participants called me a "self-hating Jew" -- hardly surprising.
The leftist counter-protest was small but frivolous. Hardly surprising again. One of my publishers in Israel told me months ago already that Peace Now and the left were dead in Israel. Not only in Israel.
I spoke to one of the participants in the counter-protest, an elderly lady with two canes, she was desperate but desperation is no excuse for giving up, she said. And even among the counter-protesters I didn't meet any post-zionists. They were all zionists. As somebody said today: "The flag doesn't belong to the rightwing nationalists."