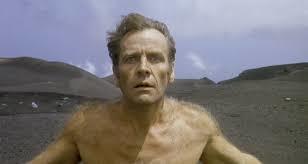 'Having provided each member of the household with an apparently transcendental experience, the young man departs, leaving each to collapse in his own way. Because they are materialistic, rich bourgeoisie, their collapses are elegant and terrifying. The daughter withdraws into a catatonic state; the son withdraws into his painting, determined to set up his own rules of esthetics that are so mysterious he cannot be judged; the mother and father seek to repeat their experiences with counterfeits of the young man. However, the maid, the good, decent, believing peasant woman, becomes sanctified.

"Teorema" is not my favorite kind of film. It is open to too many whimsical interpretations grounded in Pasolini's acknowledged Marxism and atheism, which, like Bunuel's anticlericism, serve so well to affirm what he denies. Pasolini has stated that the young man is not meant to represent Jesus in a Second Coming. Rather, he says, the young man is god, any god, but the fact remains that he is God in a Roman Catholic land.'