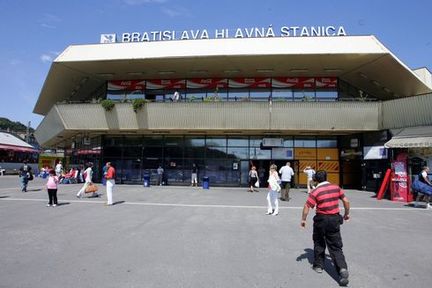 On Friday evening I took a taxi from Vienna to Bratislava together with the historian and novelist Philipp Blom. We were supposed to read a letter to our fellow Europeans but we were a bit late. Google maps didn't function properly, at least not for our taxi driver.
The occasion for these festivities (if that's the right word) was the beginning of the EU presidency of Slovakia on July 1.
A train filled with about 600 people from the Netherlands was traveling through Europe, partly forum for discussion on the EU, partly disco I assume, and as far as I'm concerned also an attempt at historical reenactment. The train had reached Bratislava, and the passengers were supposed to listen to the "letters to Europeans" but the temperature in the Old Market Hall had reached 100 degrees and the passengers hadn't been able to shower for at least three days. (Part of historical reenactment?)
According to my beloved one many pf the passengers were drunk or stoned or both. It's best to approach discussions on the EU while being slightly under the influence.