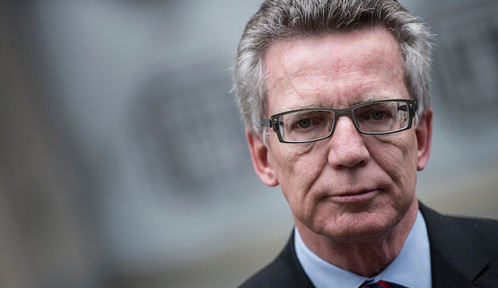 German Interior Minister Thomas de Maizière and his mixed messages -- an excerpt from an interview by Jörg Schindler and Wolf Wiedmann-Schmidt in Der Spiegel:

"SPIEGEL: Mr. Minister, after Nice and Würzburg, is Germany going to become like Israel, with bollards, security checks and a police presence on every street corner?

De Maizière: No, but we will have to get used to more intensive security precautions at major public events like Carnival parades, football matches, church congresses or Oktoberfest. That, unfortunately, is true.

De Maizière: That will have to be decided locally. It could be stricter entrance controls or large-scale barriers. It will also mean in some cases that there are longer lines at major events. But the measures have to be appropriate for the situation and proportionate. I am opposed to making any fundamental changes to our freedom, particularly when it comes to cheerful occasions.

SPIEGEL: The perpetrator in Würzburg had not been identified by anyone as radical prior to the attack. Is there anything security agencies can do to prevent an incident like this?

De Maizière: No constitutional state in the world is in a position to prevent every crime, every massacre or every terrorist act with absolute certainty. But our duty is to do everything possible. And that's what we are doing. It is essential that our security agencies gather information about people who represent a potential threat or about dangerous developments early on and put it to use."

Gathering information is essential and these days we don't need as much informers as in the times of the GDR.