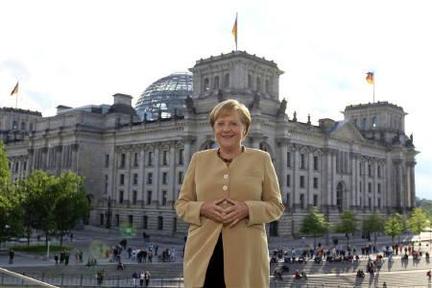 Der Spiegel on Merkel and her chances of winning the next parliamentary elections in Germany:

"Her support base is surprisingly stable. Despite the brutal results in Mecklenburg-Western Pomerania, Sunday's ugly total in Berlin and Merkel's ongoing slide in the public opinion polls, there isn't really anybody who is threatening to overtake her. She is still eight to 10 points ahead of the SPD, which would seem to indicate that a sizable group of Merkel fans haven't turned their backs on the beleaguered chancellor. There is (for now, at least) little indication that they will abandon her in the next 12 months.

In direct comparison with her likely challenger, SPD head Sigmar Gabriel, surveys show that Merkel is far ahead. The Berlin election showed once again that the SPD still hasn't figured out how to reverse years of decline, even if it limped to a victory. And it is difficult to imagine that Gabriel, after seven years as party head, will suddenly figure out how to win over a significantly greater share of voters."

"Merkel has indicated she will make her decision known by the end of the year. Should she decide to try for re-election, though, betting against her would be an extremely risky wager indeed."

Merkel as the ultimate survivor. I would bet on that.