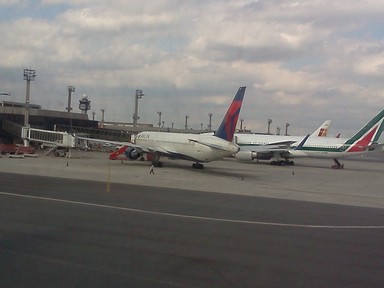 The Delta flight from Sao Paulo to JFK was delayed because of fueling problems. I was seated next to an Italian lady living in Brazil, she spoke barely English but she was charming and she wanted to know what was going on.
I tried to explain the situation to her.
After the fueling problems were resoled we taxied to the runway, and then we taxied back to the gate because of mechanical failure.
The captain promised us that everything would be resolved within thirty minutes.
But the lady next to me stood up, she said: "I spoke to my son. I have to go. Mechanical failure. Not good."
I answered: "Everything will be fine. The captain said that we will be leaving soon."
"No," she said.
She came closer as if she wanted to kiss me and then she said: "Bye-bye."
I knew what she meant with this bye-bye: you are going to die my friend, and I'm going to live.
Then she left the plane together with two of her friends. Because of this we had a delay of another fifteen minutes.