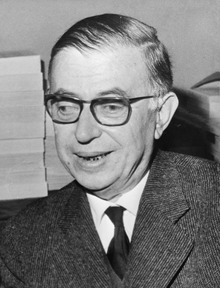 Several, no most of my friends alerted me to this article by Adam Kirsch in NYT on Dylan:

'In the summer of 1964, Bob Dylan released his fourth album, “Another Side of Bob Dylan,” which includes the track “It Ain’t Me Babe.” “Go ’way from my window/Leave at your own chosen speed,” it begins. “I’m not the one you want, babe/I’m not the one you need.”

That fall, the philosopher Jean-Paul Sartre played a variation on the same tune in a public statement explaining why, despite having been awarded the Nobel Prize in Literature, he would not accept it. “The writer,” he insisted, must “refuse to allow himself to be transformed into an institution, even if this occurs under the most honorable circumstances.” Mr. Dylan was talking to an imaginary lover, Sartre to an actual Swedish Academy, but the message was similar: If you love me for what I am, don’t make me be what I am not.

We don’t know whether Mr. Dylan was paying attention to l’affaire Sartre that fall 52 years ago. But now that he has been awarded the Nobel Prize in Literature, he seems to be following in Sartre’s footsteps. Indeed, Mr. Dylan has done the philosopher one better: Instead of declining the prize, he has simply declined to acknowledge its existence.'

'Bad faith, Sartre explains in “Being and Nothingness,” is the opposite of authenticity. Bad faith becomes possible because a human being cannot simply be what he or she is, in the way that an inkwell simply is an inkwell. Rather, because we are free, we must “make ourselves what we are.” In a famous passage, Sartre uses as an example a cafe waiter who performs every part of his job a little too correctly, eagerly, unctuously. He is a waiter playing the role of waiter. But this “being what one is not” is an abdication of freedom; it involves turning oneself into an object, a role, meant for other people. To remain free, to act in good faith, is to remain the undefined, free, protean creatures we actually are, even if this is an anxious way to live.'

'Mr. Dylan may yet accept the prize, but so far, his refusal to accept the authority of the Swedish Academy has been a wonderful demonstration of what real artistic and philosophical freedom looks like.'

The waiter performing "every part of his job too correctly" can also be understood as a token of irony, a subtle sign of self-consciousness, even proof of small, rather symbolic resistance.
And how should the café waiter perform his job in order to be authentic, free? With disdain for his clients?