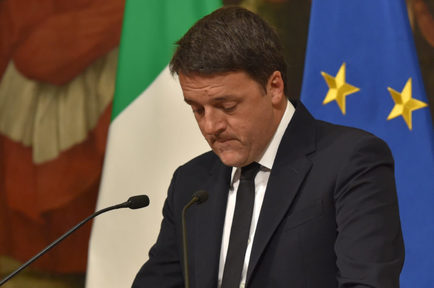 'Moreover, in Britain, broadly speaking, older voters chose to leave the European Union, while the young voted to stay. In Italy, it’s the other way around. The young turned their backs on Mr. Renzi. It was not, as in Britain, a nostalgic vote; young Italians don’t want to return to a past they’ve never had.

They are angry about enormous youth unemployment. They hate begging for poorly paid temporary jobs — with an average monthly salary of 1,200 euros, or $1,300 — not enough to let them plan for the future. It’s no coincidence that affluent Milan is among the few large cities that voted “yes” (so did Bologna and Florence, Mr. Renzi’s hometown). All the others — from Rome to Turin, from Naples to Palermo, from Genoa to Bari — voted “no.” For all his talk about moving Italy into gear, Mr. Renzi forgot the key Clintonian lesson: “It’s the economy, stupid.” If the referendum had a larger meaning, it was a vote on Mr. Renzi’s place in Italian politics, not on Italy’s place in Europe.'

Everywhere else in the West it's mainly identity and less economy, in Italy it's mainly economy and less identity. That's good to know.