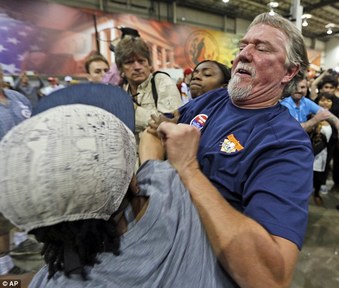 Jonathan Lethem in the London Review of Books on dress rehearsals for the Apocalyps:

"‘Theatre of Injury – that’s a good name for everything at the moment,’ one of our friends joked. It is. Everyone’s genuinely injured, and yet, in this period of prodrome, everyone’s playing at it too. The cable television stars called onto the carpet at Trump Tower, despite being off the record, leaked their complaints – apparently Wolf Blitzer was particularly indignant. Right-wing pundits insist an atmosphere of woundedness originates in left identity politics, but the bruise we’re tending at the moment is inflicted by the ancient reactionary sulk of Nixon’s ‘silent majority’ which has now blurted its grievance in the worst form possible. Rehearsals are completed: fear the real blows to come."