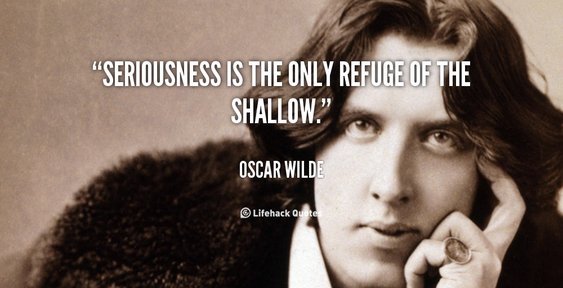 A friend alerted me to this article by Christy Wampole: How to Live Without Irony (for Real, This Time):

'Four years ago, shortly after the re-election of Barack Obama, I published an essay in The Stone called “How to Live Without Irony.” In it, I argued that the surplus of apolitical irony in a certain segment of American culture — most clearly expressed in the rise of hipsterism but visible in many other forms — had a dangerous potential. It represented a surrender to commercial and political forces that could lead to an emptiness of both the individual and collective psyche. “Historically, vacuums eventually have been filled by something,” I wrote, “more often than not, a hazardous something.”

That Age of Irony ended abruptly on Nov. 9, 2016, when people in many of the irony-heavy communities I described — blue bubbles of educated, left-leaning, white middle-class people in cities, suburbia and college towns, of which I am a part — woke up to the sobering news of Donald J. Trump’s victory, and perhaps a new reason to ditch the culture of sarcasm and self-infantilization.'

'It is essential, however, to make sure that the good kind of seriousness — steady, good-hearted, good-willed — does not slide back into moral smugness or certainty, and that the fascistic thinking and dogmatism against which we retaliated with irony does not become our own signature. If we do, and trust our “saving instincts,” we could potentially avoid lapsing into the dangerous cynicism that characterized our most recent Age of Irony.'

I'm old enough to remember to remember that people claimed that irony ended after 9/11. I remember a friend who studied philosophy in the nineties, he wanted to protect empathy against the evil force called irony.

Perhaps, there are two kinds or irony. There's American irony, smug, hip, cool and first and foremost an lubricant to sell something, if not a product than the ironist himself.
And there's old-fashioned irony, another word for humanism. How much power do weed need to defeat the evil forces? That's an ironic question.
Irony can be used for good and for bad causes, but that doesn't make irony itself suspect.

The thought that a world without a sense of humor is a better world is a very Calvinistic thought. But yes, irony is a serious matter.