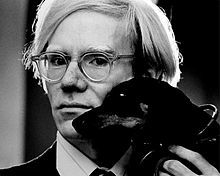 Today I drank coffee with the grandson of the surgeon who had operated Warhol, the grandson happend to be an author, Andri Snær Magnason, whom I had met years ago in Hungary.
Ironically enough on Friday the International NYT had published a story by Blake Gopnik about the surgeon and Warhol:

'For at least a month before his death, Warhol had been ill, but had done his best to keep up his usual exhausting pace. His terror of hospitals had prevented him from getting any serious treatment. Even once Warhol had finally ended up in the office of Bjorn Thorbjarnarson, a leading surgeon — he was known for treating the Shah of Iran — Warhol had begged for some kind of stay-at-home treatment. “I will make you a rich man if you don’t operate on me,” the artist had said, Dr. Thorbjarnarson recalled during my visit to his New Jersey home in 2014. (He is now 95 and lives in Florida.)

Dr. Thorbjarnarson refused Warhol’s entreaties and found himself justified three days later, when the sick man was at last on the operating table at New York Hospital (now NewYork-Presbyterian). The surgeon found a gallbladder full of gangrene; the organ fell to pieces as he removed it, he said.'

Mr. Thorbjarnarson had also operated the Shah. I said to his grandson: "We could blame your grandfather for almost everything, the Iranian revolution, the death of Warhol, the fact that Carter lost in 1980, reagonomics."

"I think we should also blame him for Trump," Andri Snær Magnason said.

His fear must have been immense.