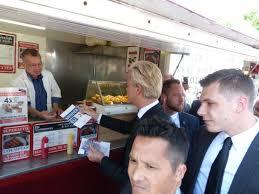 "Mr. Wilders, a former punk rocker whose maternal family is partly Indonesian, might seem an odd figure to purify the identity of a largely Protestant trading nation with a long tradition of allowing people of different faiths and persuasions to live in relative peace. But what he has in common with his followers is a seething rage against people he suspects of thinking they’re better than him.

This may not be sufficient to make him prime minister, but the politics of fury have done plenty of damage already."