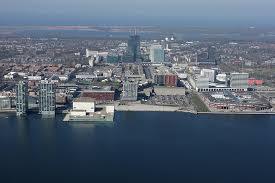 Alexander Smoltczyk in Der Spiegel on the city of Almere in the Netherlands and the elections:

'Tjeerd Herrema is a Social Democrat with the PVDA party, gaunt and bald, is wearing a shimmering navy-blue suit that perfectly matches his glasses. There's nothing about his appearance to suggest that he is a former labor union official. But that's just how things are in Holland.

Herrema explains how Amsterdam changed during the 1970s, when Turks and Moroccans moved into the poorer neighborhoods and the heroin problem exploded. "The white workers didn't necessarily feel enriched by the new cultures," he says. "So, they moved away, to Almere. Today, many feel as though they are experiencing the same thing all over again."

It's a widespread sentiment despite the fact that the Netherlands has an extremely strict admission policy and, in contrast to Germany, very few Syrian refugees arrived in the country. But Almere's population of pioneers is 40 years older today, with all the fears that come with advanced age. They spent decades paying into the pension system and now have to share the pie with new arrivals? "It's a kind of Heimweh", Herrema says, using the German word for homesickness. "Heimweh was one of many reasons why they don't feel at home. This new town didn't have identity as Amsterdam. So they couldn't relate to it too much."

Viewed in that context, Almere is also a metaphor for loss, one that is just as present as the noise from the nearby A6 motorway and also just as difficult to get rid of. It's the ambient noise of globalization.

Herrema says there's no longer such a thing as predictable voters and loyalties are coming undone. Members of the labor unions are flocking to the Socialist Party, while workers, unfortunately, are turning to Wilders, he says. Even many young Moroccans are no longer voting for the Social Democrats the way their parents did. An astoundingly large number of Surinamese and second-generation immigrants are likewise expressing sympathy for the statements made by Wilders. The homesickness is political as well.'