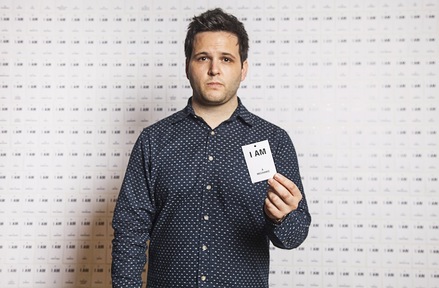 'DelGaudio knows that when many of us think of magic, we summon cartoonish stereotypes: top hats and wands at children’s birthday parties; mumbo-jumbo at Interstate-adjacent casinos; G.O.B. on “Arrested Development.” DelGaudio told me, “I daily suffer from the slings and arrows of being ‘a magician.’ ” His conviction — one he articulates with winning passion and occasional Shakespeare-quoting grandiosity — is that magic offers a means of exploring ideas just as complex, and of provoking emotions just as powerful, as those encountered in any other art form.'

'DelGaudio owes his career to a tiny shop called Zeezo’s, in Colorado Springs. When he was 12, he went in, intending to buy a practical joke. The clerks steered him instead toward “The Expert at the Card Table,” a slender book from 1902 that cataloged techniques for the stealthy manipulation of playing cards. “Expert” was written by an enigmatic cardsharp named S.W. Erdnase. Even the basic facts of Erdnase’s life are unknown, down to his real name: S.W. Erdnase was a pseudonym adopted, maybe, by an E.S. Andrews (read it backward), an E.W. Sanders (shuffle the letters) or someone else entirely. Whoever he was, Erdnase achieved lasting fame: More than 100 years later, no practitioner of sleight-of-hand worth his aces is without a copy, and his identity is one of modern magic’s foundational riddles. “He wrote the bible,” DelGaudio said, “and then he vanished.”

At first, DelGaudio didn’t much care about magic. His favorite entertainers were physical dynamos of classic Hollywood, like Chaplin, Keaton and Gene Kelly. But “Expert at the Card Table” pulled back the curtain on a discipline defined by virtuoso physicality of a sneakier sort. DelGaudio suspects that the clerks sold him the Erdnase with low expectations: It’s advanced reading for a kid. If so, “the joke was on them,” he said, because “three or four months later, I could do everything in the book.”

By ninth grade, DelGaudio was capable not only of exquisite second deals but also of significantly more difficult “center deals,” in which the dealt card comes from the middle of a deck. (DelGaudio says the move was once seen as a “unicorn.”) He spent hours refining minuscule gestures: riffling a thumb up a deck until it caught the topmost card; riffling again and catching two cards; then three; and so on. His fixation alienated him from his peers. Bullies took to “throwing pencils at me,” he recalled, adding: “It was rare to find someone at school I connected with. I wanted to go hang out at a bar and see a guy deal off the bottom of the deck. I wanted to go to pool halls and watch people shuffle cards or hustle.”'

When I was eight or nine I was interested in becoming a magician as well. But my weakest spot was shuffling, I'm still quite bad at it.

On the eight birthday of my godson I asked a magician to perform for my godson and his friends. I was intrigued by the magician. Before the show he whispered in my ear: "I may be a bit different today, because my girlfriend fell ill.'" I'm still not sure whether this was part of the show or not.

That's what a novelist aims for as well.