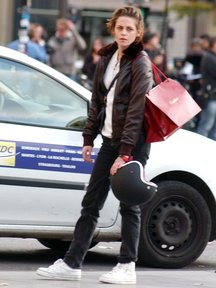 'Maureen, who works as a personal shopper for a spoiled celebrity named Kyra, certainly brushes up against glamour, and occasionally tries on a piece of Kyra’s borrowed couture. But she dwells mostly in a benumbed, stressed-out limbo, in frenzied motion from one nowhere to the next. Her human connections are often mediated by screens. She video-chats with her boyfriend, a tech consultant on assignment in Oman. She exchanges feverish texts with a stranger on a train from Paris to London and back. When asked what she’s doing in Paris, Maureen answers, “I’m waiting.”'