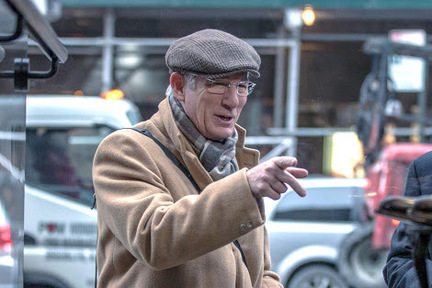 'In his own mind, Norman Oppenheimer, a well-dressed, well-spoken Manhattanite played with feeling and mischief by Richard Gere, is what’s known in Yiddish as a macher. He travels the circuits of money and influence, always just a few capillaries removed from the beating heart of power. His mental Rolodex swells with the names of the good and the great, every one of them “a very close friend.” He’d be happy to introduce you.

His alleged friends — financiers, captains of industry, political big shots in Washington and Tel Aviv — might reckon things differently. A rising Israeli politician named Micha Eshel (Lior Ashkenazi) describes Norman to an aide as “a warm Jew.” It’s the nicest thing anyone can say. The aide, an actual fixer named Duby (Yehuda Almagor), has other ideas. In his eyes Norman is, at best, a minor annoyance; at worst, a threat to his patron’s career.

’s no accident that some of Duby’s words about Norman — “scheming” and “bloodsucking,” in particular — evoke the historical language of anti-Semitism. Mr. Cedar, a New York-born Israeli filmmaker, has a sharp eye for intra-Jewish conflict, for the narcissism of large and small differences that can cause the unity of God’s chosen people to splinter like matzo. His previous film, the sublime academic comedy “Footnote,” mined father-son rivalry and scholarly antagonism for biblical pathos and borscht belt humor. “Norman” traces fault lines, more cultural and temperamental than ideological or religious, between the members of the diaspora (or at least the New York wing of it) and their cousins in the Promised Land.'

While leaving the movie theater I overheard somebody saying: "It was a bit anti-Semitic wasn't it?"

Definitely not more anti-Semitic than "The Merchant of Venice". Actually, Norman Oppenheimer is a Shylock for our times, but he doesn't operate among gentiles, he operates among Jews.

According to this movie the world is nothing more than a You-scratch-my-back-and-I'll-scratch-yours-world. (Are Jews better at scratching?)

Some people don't have a back to scratch, others lack hands for scratching. So much is for sure.

Go and see "Norman" and decide for yourself what kind of back scratcher you would like to be.