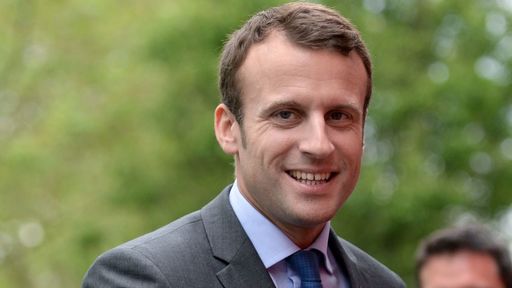 Emmanuel Macron's victory in France has galvanized Germany's Social Democrats. But Merkel, too, is hopeful that the new French president will mark an improvement in Berlin-Paris relations. There are, however, plenty of potential conflicts looming.

History sometimes takes strange twists and turns. Three years ago, on a sweltering day in summer 2014, the telephone of German economist Henrik Enderlein rang. Enderlein is a professor at the Hertie School of Governance in Berlin and on the other end of the line was Jean Pisani-Ferry, an economist in Paris.

The caller wanted to know if Enderlein's university had a visiting professor spot for a young government adviser named Emmanuel Macron. Pisani-Ferry related to his German colleague that Macron had had a falling out with his boss, French President François Hollande, and was currently looking for a job.

Even then, Enderlein knew Macron well. He had exchanged several papers with Macron, a former banker, and had also spoken with him in Élysée Palace in Paris about the troubled relationship between France and Germany. Both Enderlein and Pisani-Ferry were certain that Macron had a bright future ahead.

Would European history have taken a different turn had Macron come to Berlin that summer?

Immersing oneself in such hypotheticals is always a fraught undertaking: Would Marine Le Pen have won the French presidential election? Or would François Fillon have managed to eke out a victory despite the many scandals associated with his candidacy?

But it is nevertheless an interesting discussion to have. In any case, Macron managed to patch up his relationship with Hollande before he could agree to a position in Berlin -- and an astounding political career took off.'

Well, what if is excellent material for novelist. Marcron as visiting professor in Berlin could be an excellent novella. Berlin, the city where Macron's astounding cheer in academia took off.

This is how the article in Der Spiegel ends:

'Most of all, however -- and this is perhaps his greatest difference from Angela Merkel -- he wants to move away from the trivialities of European crisis management. In his Humboldt University speech, Macron quoted the legendary European Commission President Jacques Delors. He once said that Europe needs both a vision and a screwdriver. "Unfortunately, we currently have a lot of screwdrivers," said Macron. "But we are still lacking a vision."'