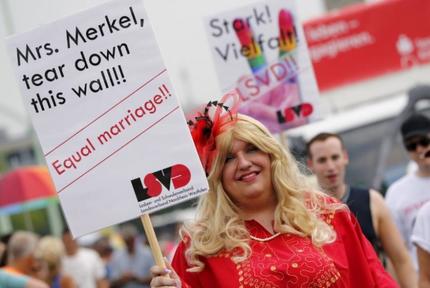 Der Spiegel on Machiavelli and gay marriage in Germany;

'Internally, Merkel, had tested the new position several times before her appearance on Monday. On Sunday evening, during a meeting of the leaders of the joint parliamentary caucus group of the CDU and the CSU at a restaurant in Berlin, she floated a trial balloon. She followed up by addressing the issue in a Monday morning meeting with the CDU's national executive. CSU boss Seehofer even stated publicly on Monday that it was his opinion that marriage for all should be a personal decision for members of parliament. But the leaders of both parties had been thinking about the distant future -- and not about the final week before parliament breaks for its summer recess. It was the comment Merkel made at the Brigitte talk and the breaking news alert from that event that got things moving.

The SPD's Schulz got the message about Merkel's involuntary offer later that night in his apartment, having been informed by Thomas Oppermann, the SPD's party whip. Oppermann also sent a message to Foreign Minister Sigmar Gabriel, likewise of the SPD. The three were all in agreement that the chancellor had made a mistake -- and it was one they should exploit. Merkel still had no idea at that point that she was about to get steamrolled. She telephoned with Seehofer at 10:30 p.m. that night, but she didn't say a word about her Brigitte appearance.

On Tuesday morning, officials at SPD headquarters quickly obtained a recording of Merkel's remarks. Schulz had a previously scheduled press conference that morning, ostensibly to provide his assessment of the work of the SPD's ministers in Merkel's coalition cabinet. Ahead of that news conference, party whip Oppermann undertook one last attempt at an amicable solution, asking Volker Kauder, his CDU counterpart, if the conservatives would support a pro-gay marriage bill that week. "No," Kauder answered in a text message. Whereupon Schulz then announced to the press that the SPD would push through marriage for all with votes from the Green Party and the Left Party. The opportunity was too good for the party to miss out on.'

It's not about refugees, nor about Greece, nor about the EU and a fiscal union, it's about gay marriage. That's the surprising twist in the German campaign. I would say: a good twist.