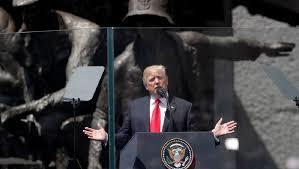 Glenn Thrush in NYT on Warsaw (and Paris):

"Mr. Trump returns to a deteriorating domestic situation, facing months of investigations into whether people in campaign colluded with Russia and what appears to be the decreasing likelihood that a deeply divided Senate majority can quickly pass a repeal of the Affordable Care Act.

But he’ll always have Warsaw. The apex of the trip from the president’s perspective — and one of the most personally satisfying episodes of his term so far — was Mr. Trump’s powerful invocation of Western exceptionalism to a crowd of like-minded Polish nationalists on Thursday."