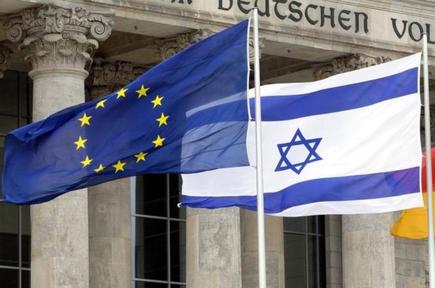 And here's another peace plan. Bradley Burston in Ha'aretz:

'But a new poll of Israelis and Palestinians by political scientists and public opinion analysts Dr. Khalil Shikaki and Dr. Dahlia Scheindlin suggests that while support  for two states is waning,  "If Israeli and Palestinian leaders were to forge an agreement, sign it and throw all of their political behind selling it to their constituents, the public on both sides would very likely come along. But not for long."
How could an initiative based on EU membership possibly work? It's clear that opposition to such a plan would be robust, with a multiplicity of interests in opposition.  Consider, though, the following as an outline of a possible scenario: Israel and the PA agree to a form of confederation within the EU. Israel and Palestine are independent states. Palestine is located on most of the West Bank with Israel ceding it land in the Negev in exchange for annexation of settlement blocs adjacent to pre-1967 Israel.
An agreed-upon number of West Bank Palestinians will receive permanent residency within pre-1967 Israel, but will hold Palestinian and EU – not Israeli – citizenship.
Israeli settlers whose settlements fall within the newly independent Palestine will hold Israeli and EU – but not Palestinian – citizenship.
Land disputes will be heard in a court in which EU, Palestinian, and Israeli judges will rule.
The capital of Palestine will be based in areas of Jerusalem to which the Jerusalem municipality and Israel currently fail to provide services.  In joint projects as well as in small and large businesses, Palestinians will be encouraged to work in Israel, and Israelis in Palestine, as part of a wider effort to re-introduce two peoples whom generations of violence have estranged from one another.  School texts on both sides will be rewritten to take into account the narratives and histories of both sides. The texts will be examined closely to eliminate incitement. Conversational language and literary instruction in Hebrew and Arabic will be strongly encouraged.   The EU, Palestine and Israel will jointly deploy peacekeeping forces – similar to the Israeli-PA joint patrols which once functioned well within the West Bank – to monitor and enforce the terms of the agreements between the sides.  As the era of Benjamin Netanyahu and Mahmoud Abbas churns to an end, it's time that we in Israel and Palestine started looking outward for inspiration. Toward places like Northern Ireland, for example. Places where peace was once considered an impossibility, and bigotry and bloodshed as integral to the atmosphere as oxygen.
In a once-unimaginable situation, the Northern Ireland border is now porous, but the sides feel safe, their prejudices fading, a fledgling sense of reconciliation taking hold.
Israelis often think they have too much to lose by trying something new. Maybe it's time they began to think about what they stand to gain. Like an actual peace, for example. Like their children actually wanting to live in this country. And, if nothing else – for the many whose healthy obsession is travel – an EU passport.'

There's only one thing. Too many voters in the EU don't want Muslims, Arabs of Jews for that matter in their club. To be fair, some of them would like to dismantle their exclusive club, but even those will object to membership for Israel and the PA. Rather war in the Middle East than the other at home.