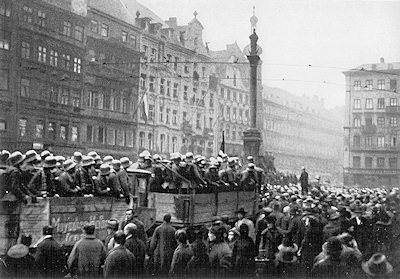 Timothy Snyder in The NYT on now and then:

'The president has failed when no failure can be innocent. He has provided American Nazis with three services, for which they have thanked him: He has normalized their ideology; he has excused their actions; and he has given them hope that he will blame his opponents the next time America is struck by terrorism.

A writer for The Daily Stormer (a website that takes its name from the most anti-Semitic newspaper of the Nazi period) called Charlottesville a “Beer Hall Putsch,” referring to an early attempt by Hitler to seize power. The writer’s meaning was that the events in Virginia were an early failure that promises later victory. American Nazis dream of another Reichstag fire, a moment of terror in which the president will show his true colors and his opposition can be crushed.'

A Beer Hall Putsch in America somewhere in 2018? Politics is stranger than fiction.