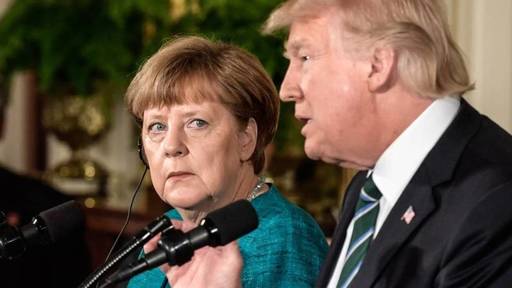 "Compared to the United States, Germany is a calm, balanced entity, stable and centrist. That's precisely the goal that the authors of Germany's constitution had in mind and it's now possible for us to say they were successful. During the first two decades of its existance, the postwar Federal Republic of Germany achieved an economic miracle, and today it is also a political leader in the world. It has a solid foundation, it is cognizant of the obligations that stem from its history and it isn't afraid of boredom. That is what is expected from it and that is what has enabled it to build trust and create hope around the world. Only 72 years after the end of the war, that is nothing short of a political miracle.

The fact that Americans' soul and political mores could bring forth someone like Trump -- a man who is the product of megalomania, of the yearning for salvation, of violated taboos and of a rather slipshod grasp on reality that is shaped by Hollywood -- has frittered away the world's trust in the country, at least for the time being. But just as boredom has its virtues, so too do these qualities. They also dominate in Silicon Valley and are behind the global success of companies like Facebook, Apple, Google, Amazon and Tesla.

Germany can't keep up with that. It still lives quite well off an old, now-disreputable idea: the combustion engine. But the new era is shaped by Silicon Valley inventions, by the dynamics of the crucial communications and biotechnology sectors.

That's why we, as Germans, should not exult about having a solid Merkel instead of an oafish Trump. Almost everything about him is worthy of rejection, but he was made possible by the tremendous forces the United States is capable of unleashing -- both positive and negative.

The world can be sure that, at some point, a responsible person will once again assume the presidency. Unfortunately, it will take much longer before Germany can inject dynamism into its economy."

Well, we should praise the virtues of boredom. If that's the price we have to pay for stability we should not complain.

Bit it's refreshing to read that Trump is for once not an example of decline, just proof of the extraordinary forces in the US that can be unleashed.

I hope next time other extraordinary forces will be unleashed.