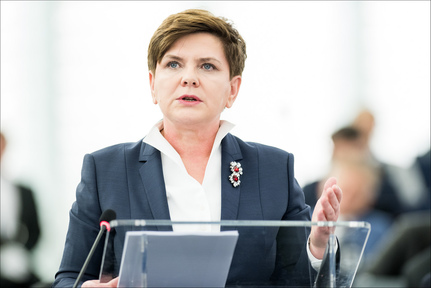 The Guardian on Poland an tyranny:

'On a visit to Bulgaria last week, the French president, Emmanuel Macron, said Polish citizens “deserved better” than a government at odds with the EU’s democratic values and economic reform plans. Hitting back in unusually personal terms, the Polish prime minister, Beata Szydło, accused Macron of arrogance resulting from a lack of political experience.

EU ministers are expected to discuss the Polish rule of law procedure in September, when the commission will be looking for backing from member states. Frans Timmermans, the European commission vice-president, has said the commission stands ready to launch a formal warning using the article 7 procedure. Article 7 is the EU’s never-before-used “nuclear option” that could lead to suspension of a country’s voting rights.

Poland’s nationalist government enjoys strong support from the like-minded Hungarian prime minister, Viktor Orbán, but other countries in the region have distanced themselves.'

Tyranny comes from within.

The lack of judicial independence is often the beginning of tyranny.