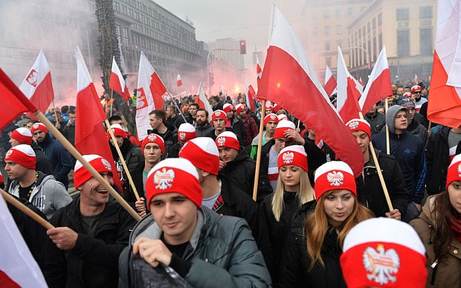 Jan T. Gross ("Neighbors") in The NYT on Poland and fascism:

'If you want a sense of where Poland could be heading, look no further than the events last Saturday in Warsaw.

Tens of thousands of people — many of them young men with crew cuts, but some parents with children, too — flocked to the Polish capital to celebrate Independence Day in a march organized in part by two neo-fascist organizations. They waved white and red Polish flags, they brandished burning torches, and they wore “white power” symbols. They carried banners declaring, “Death to enemies of the homeland,” and screamed, “Sieg Heil!” and “Ku Klux Klan!”

The official slogan of the march was “We want God” — words from an old hymn that President Trump quoted during his speech in Warsaw in July.'

'Ever since the Law and Justice Party won both the presidential and parliamentary elections in 2015, Poland has been undergoing a disturbing political transformation. Law and Justice is an Orwellian name for a party that constantly violates the law, breaks constitutional provisions and is hellbent on subjecting the courts to its control. The party is dismantling the institutional framework of parliamentary democracy piece by piece in order to remove any restraints on the personal power of its leader, Jaroslaw Kaczynski. “Prezes,” the Boss, people call him.'

That many people cannot let go of God is probably unavoidable, but when mysticism becomes a mass movement with torches and enemies then God is just another word for purity and "we" another word for fascism.