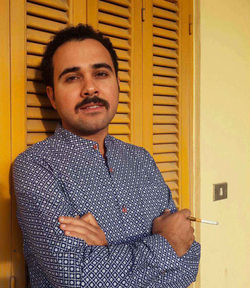 Last night over dinner the publisher talked about the Egyptian author Ahmed Naji, who was jailed for sex scenes in a novel. I had not heard of him, so the publisher forwarded me this article by Zadie Smith in last year's december issue of NYRB:

'I first heard the name Ahmed Naji at a PEN dinner last spring. I looked up from my dessert to a large projection of a young Egyptian man, rather handsome, slightly louche-looking, with a Burt Reynolds moustache, wearing a Nehru shirt in a dandyish print and the half smile of someone both amusing and easily amused. I learned that he was just thirty and had written a novel called Using Life for which he is currently serving a two-year prison sentence. I thought: good title. A facile thought to have at such a moment but it’s what came to mind. I liked the echo of Georges Perec’s Life: A User’s Manual—the coolness of that—and thought I recognized, in Naji’s author photo, something antic and wild, not unlike what you see when you look at pictures of Perec. You could call it judging a book by its cover: I’d rather think of it as the readerly premonition that this book might please me. If he had written a book called Peacocks in Moonlight and posed for one of these author portraits where the writer’s head is resting on his own closed fist, I would have been equally shocked and saddened to hear he was in prison, but perhaps not as keen to read it.'

'In an attempt to draw more attention to Naji’s cause, Mona recently translated three very short, flash-fiction type stories for PEN’s website. They published one, “The Plant,” which begins like this:

I will not come through the door or the window,

but as a plant you cannot notice with your naked eye.

I will grow day after day, to the sound of your singing and the rhythm of your breath at night. A small plant you will not notice at first, growing beneath your bed.

From door to bed, to bathroom to closet, standing or sitting against the mirror. Through all these acts, and to the sound of your humming, I will grow. A small green plant. With grand slim leaves sneaking out from beneath your bed.

I read this voice first as the spirit of underground resistance, then as the essence of pervasive dictatorship, and then back to resistance once more. The second story, unpublished, was called “Ambulance” and began like so: “She was sucking my dick when suddenly she stopped to ask if I had given grandmother her medicine.” The last, also unpublished, was called “Normal,” and it opened this way: “One time as I was heading back to Sixth of October city, a prostitute showed up on the way dressed in the official uniform, a black cloak without a headscarf, and instead she had bangs and black hair falling over her shoulders. She was carrying a huge neon bag.”'

Needless to say, in the West 'the spirit of underground resistance' is a synonym for marketing, but there are places where literature is taking (too) seriously.

Like Zadie I did feel a superficial but strong sense of kinship. As soon as I'm done with Schmitt (Carl), Kehlmann and Ugrešić I will continue with Naji.

And I'm wondering what my Arabic translator and/or editor may have changed in my novel "Tirza".