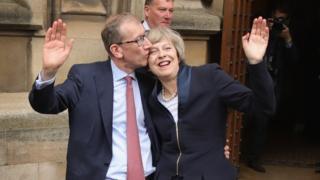 And now something about the dead woman walking and superiority; Ellen Barry in NYT on Theresa May:

'She has been undermined by her own cabinet ministers, derided as pitiful in Brussels and mocked in the news media as a “dead woman walking.” Though the only other woman to hold the post of prime minister, Margaret Thatcher, was able to transcend her gender, Mrs. May has been hemmed in on all sides by stereotypes — first criticized as a humorless headmistress, not human enough to be likable, and then as too human, and therefore weak.'

'Ms. May lacks many of the qualities that draw a person into politics. She does not enjoy the public spotlight, or have a vision she yearns to share with the country. In a political environment that demands social ease and boundless intellectual confidence — the “tranquil consciousness of effortless superiority” once attributed to Oxford’s Balliol College by one of its famous alumni — she is formal, controlled and extremely private.'

After reading this article I must admit that I had great sympathy for Ms. May, probably the first time in my life.