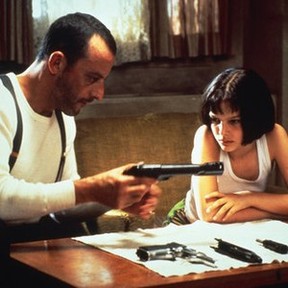 To get ready for the holidays I watched Luc Besson's movie "Léon: The Professional" with a twelve-year-old Natalie Portman. In 1994 Janet Maslin was not smitten with Ms. Portman's performance: "Mr. Reno, who also appeared in "La Femme Nikita" and Mr. Besson's "Subway," plays Leon with a soulful air that overstresses his superiority to a brutish world. Ms. Portman, a ravishing little gamine, poses far better than she acts."

I would say that Ms. acts rather well, especially for a twelve-year-old. But "Léon" is a movie about gung-ho Lolita, and somebody needs to be punished for the transgression of our moral boundaries, in this case it was the young Ms. Portman.

Yes, the movie is tad sentimental, and a certain sense of pedophilia is never far away, but the absence of moral clarity is gratifying. A perfect movie for the holidays, maybe even for Christmas dinner.