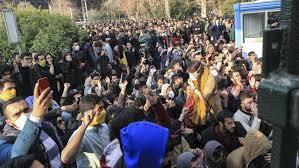 Allison Kaplan Sommer in Ha'aretz interviewing Meir Javedanfar, an Iranian-born lecturer at the Interdisciplinary Center Herzliya and the University of Haifa who has been monitoring Iranian social media since the unrest began.

So is this a case of Iran First? Iranians don’t want to be a regional power anymore? Much has been made of the fact that slogans in the protest condemn the money spent on Iran’s overseas adventures in Syria, Yemen, Iraq and Lebanon with slogans like “No Gaza, No Lebanon, No Syria, My life for Iran!” Javedanfar doesn’t think this means Iranians want to exit the world stage completely. “Iranians still want their country to be respected as a regional superpower, they just don’t want it to happen at the cost of their economic security and environmental safety.”

A regional superpower? Yes, please. But get rid of our middle class anxieties first. Very human, very civilized, the great thing about the petty bourgeois nowadays is that they really hate to sacrifice their children for lofty ideals.