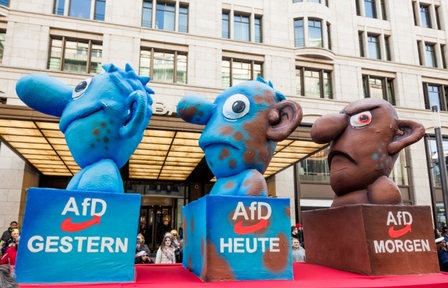 Der Spiegel on social media, AfD and freedom of opinion:

'For right-wing populists, there is much at stake when it comes to how Twitter and Facebook monitor their platforms for illegal content. Social media channels are a vital means for the party to approach its supporters free from the filter of critical media outlets. Authors of the postings are very aware that the more drastic the message, the greater the attention they will receive.

"In these times, a charge of incitement is like the new Federal Cross of Merit," says Jens Maier, a notoriously racist AfD parliamentarian from Saxony in reference to Germany's highest civilian honor. He, too, has recently run afoul of Twitter monitors, with a tweet that appeared on Maier's account on Wednesday quickly being deleted. The tweet referred to the mixed-race son of tennis star Boris Becker as a "little Halbneger," with the German word "Neger" standing in for both "negro" and for an even less savory racial slur. Maier has since said that a staffer is to blame for the tweet.

Within the AfD, it seems to have become some sort of status symbol to be banned by a social network, only to turn to a different platform to complain loudly of the alleged censorship. Doing so is nothing less than the misappropriation and abuse of the freedom of opinion. In contrast to Iranian protestors or Turkish journalists who criticize their authoritarian governments, the German populists are risking very little with their calculated provocations.'