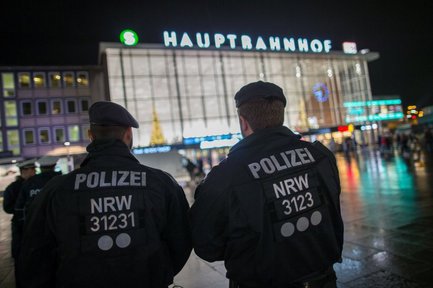 'As soon as you hit the like button on Facebook pages like Heimatliebe.Deutschland (Love for the German Fatherland), Truth24 or any local branch page of the right-wing populist Alternative for Germany (AfD) party, you enter a parallel reality. And it is dark. Day after day, your timeline is filled with reports of horrific violent crimes and rapes. The images show men who look Arab or African and women looking into the camera as someone holds a hand over their mouth from behind. Or images of children cowering in the shadows.

One particularly egregious page is Rapefugees.net. The site's creators claim that the police, politicians and the media are working together to cover up the truth. Using an online map of Germany, they use pins to mark sites of violence or sexual offenses purportedly committed by refugees.

The inflammatory term "rapefugee" has been appearing with increasing frequency on far-right web pages since the events of new year's eve 2015 in Cologne. "Rapefugees not welcome" T-shirts have also appeared from time to time at demonstrations in Dresden by PEGIDA, the anti-immigration group known in full as Patriotic Europeans Against the Islamization of the West.

Spending a bit of time on the site is enough to leave anyone frightened. It renders Germany, a country generally celebrated for its relative safety, nearly unrecognizable. The entire map is covered with red, yellow and purple flags, squares and pins purportedly marking the locations of incidents of rape, sexual abuse and exhibitionism. There are also a few gravestones marked with "RIP" for alleged murders committed by refugees.'

'For most of the news reports on the Rapefugees map, it's unclear at first glance whether the story is true or false. With most, the only takeaway is that there was some kind of encounter between the perpetrator and victim. Nevertheless, the incidents on the map are often listed as attempted rape, gang rape or, rather inventively: "GANG RAPE Attempt and Beating Attacks by ISIS Sex Jihadists." The actual incidents as reported by police seem a lot less dramatic.

To cite but a few examples:

May 13, 2016, in Hagen, Germany: At midnight, three young men harassed a 13-year-old girl at the train station and groped her. The 13-year-old boy accompanying her intervened and the three young men then attacked him. Passersby arrived and the three young men fled. The description given of the men: "North African appearance."
May 21, 2016, Düsseldorf: A couple was walking along the banks of the Rhine River when the young woman was suddenly hugged from behind and fondled. As her boyfriend stepped in, he was hit by several people. The description of all perpetrators: "Mediterranean appearance."
July 2, 2016, Nuremberg: A young women was walking home at 3 a.m. when someone approached her from behind and touched her sexually. She screamed and he fled. The physical description provided: "Mediterranean appearance."
Aug. 28, 2016, Türkismühle in rural Saarland: An unidentified man approached a 38-year-old woman at the train station. He pushed her against the wall, grabbed her from behind and attempted to kiss her. As she "energetically spoke to him," he fled. Description: "Mediterranean appearance."
There's no question about the seriousness of the four cases, but contrary to the claims made by Rapefugees.net, they were not rapes. And there was no indication of alleged "ISIS sex jihadists."'

'Pickert, 54, a deputy police commissioner in Bavaria, ties the rise in reports of sexual offenses to several factors. One is that many German citizens first learned that groping was a punishable offense following the debate over the Cologne attacks. And a change in the law in 2016 meant that groping is no longer solely punishable as an insult, but is now explicitly considered to be sexual harassment. Previously, groping had been absent from the statistics on sexual offenses maintained by police, but now such incidents are included. "It's that and not some change in everyday reality that explains the sudden surge in the number of crimes reported," Pickert explains.

What is conspicuous in the statistics, however, is the fact that the number of suspected German sex-crime perpetrators has either stagnated or gone down, while the number of immigrants suspected of committing such crimes has increased significantly. This trend, Pickert claims, has been visible for five years. "It's no wonder," he adds, since more immigrants have arrived during that time. Futhermore, he says, when compared to the German population, immigrants are more frequently young and male and are more likely to live in a large city, lack education, be unemployed and have no income. "These can all be factors that promote criminal behavior."

During the first half of 2017, Pickert says, about one-fifth of all sex crimes were committed by immigrants living in refugee housing. About 20 percent of all victims were themselves refugees, he says. This means that, at least proportionally speaking, other refugees are at particular risk of becoming victims of sexual assaults by immigrants.

So, what can be done to counter this development? "Just because a certain segment of the population is conspicuous for the number of sex crimes it commits doesn't mean we need new answers," argues Martin Rettenberger, the director of the Center for Criminology.

'Arabs or Africans Not Intrinsically More Inclined to Assaults'

He says that some of the immigrants come from societies where sex offenses are more rarely punished, where these kinds of crimes are committed more frequently. "But most people quickly adapt their behaviors to their new social environment," Rettenberger says. "Social values and norms that were once internalized can still be changed. Arabs or Africans are not intrinsically more likely to commit assaults than Europeans."

In the United States, he notes, five times as many people are victims of intentional homicide than in Germany. "And yet nobody would say Americans are more violent than Germans." What's key, he believes, is the background of the individual. He notes that many sex offenders have impaired impulse control, often combined with low self-esteem. In a particularly high number of cases, perpetrators have unstable personalities or have suffered trauma -- and many aren't subject to the natural controls exerted by close social relationships, having fled to Germany on their own. Unsurprisingly, such factors are more present among refugees than among other segments of the population.'

Yes, in the US chances are five times as high to be a victim of intentional homicide than in Germany and yet nobody (almost nobody) would make the claim that all Americans are murderers.

Those who insist that it is the Islamic culture or Arabic culture of African culture that turns some men info sexual offenders are at best simplifying things but more probably they are covering up their own bigotry, racism and xenophobia, all in the name of fighting sexual violence of course.